What is Vinyasa Flow Yoga? 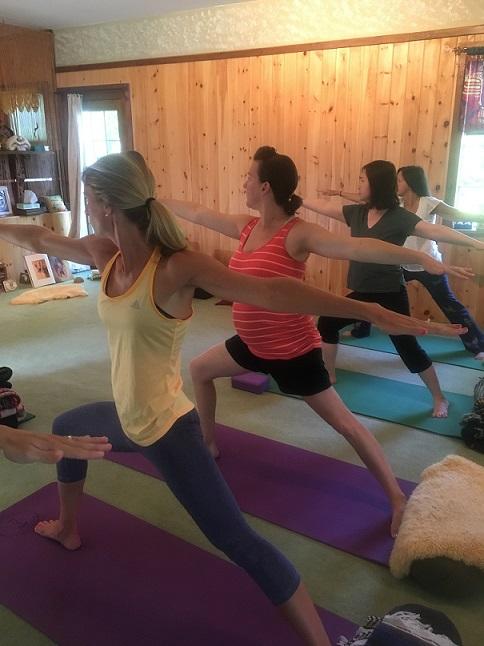 As the popularity of yoga exploded in the 1990’s and continued to grow, vinyasa flow became the most popular generalized form of yoga. So what exactly is vinyasa flow yoga? Yoga by definition is the union of the mind, body, and breath. Many people flock to yoga for the fitness factor that gyms and some yoga studios emphasize. While the physical exercise one gets from doing the yoga poses is a real benefit, the practice is not really yoga until you flow on the breath. This is the definition of vinyasa flow yoga- to flow on the breath.

So next you might ask, “ Well, I am always breathing so what does it mean to flow on the breath?” Yoga breathing is very specific and different than the breath you might use when you are lifting weights or jogging around the block. The typical athletic breath is in through the nose and out through the mouth. While starting your yoga practice with a few of these type of breaths to let out excess tensions and anxiety before you move into flowing poses may be a good idea, when performing the poses the breath is both in and out through the nose.

Since vinyasa is a more active form of yoga than some, it often attracts those looking for a yoga workout.

If you are not aware of the breath, not practiced in breathing out and in through the nose, then you are simply doing exercise, not vinyasa yoga. In order to connect to the breath more easily often, an audible breath is heard (formed in the back of nose or throat and called ujayi) in serious yoga practices like Ashtanga or Vinyasa. Vinyasa is actually an offshoot of Ashtanga, the original “flow” practice, Ashtanga is more specific than the general vinyasa classes. It has six “series”, each having specific poses done always in the same order. What Ashtanga has in common with Vinyasa is that 3 poses are often added between other poses.

The three poses that form the foundation of a good vinyasa practice are chatarunga, up and down dog (Ado Mukha and Urhdva mukha svanansana). These are strong poses so it is useful to learn them from a teacher who can break them down.

If done improperly, shoulders can be strained and one can hang on joints like the hips and shoulders.

Doing these poses properly can be a challenge if the teacher is doing a very fast form of vinyasa. If the student does not have a firm foundation of these three important poses, bad habits can develop. Yoga is a “practice”. The hope is that we continue to refine and improve each pose.

After one understands these three poses, the rest of the vinyasa formula is to add a pose in between this sequence of plank, up dog, down dog, which are all joined by stepping or jumping from one to the next.  The additional poses are meant to be held for five breaths, though in faster classes this may not happen.

Vinyasa is a fun form of yoga, often accompanied by music to keep the energy going.  It is a moving meditation if done correctly with specific eye and breath focus, definitely a good way to reap the physical benefits of yoga- flexibility and strength. If you take one class and do not love it there are different paces and styles of vinyasa, some slower or faster than others. If vinyasa does not appeal to you, do not give up on yoga.  Check out other forms and teachers until you find the mix of yoga practices that work for you.

Donna Amrita Davidge teaches many forms of yoga including Vinyasa, Kundalini, Restorative, and Hatha /Iyengar and Ashtanga influenced and meditation in New York City since the mid-1980’s and at her ancestral historic home in Maine since 1997. Looking for a yoga retreat on the east coast? Sewall House offers personalized yoga retreats that fit everyone’s schedule. See if the dates you want are available here.

Previous Post
How To Find Yoga Retreats That Will Inspire & Restore You
Next Post
Why Try A Yoga Retreat?