To create a safe nurturing environment for guest to explore themselves, their experiences and their life style (goals) in a personally impersonal family community.

To provide an escape from daily responsibilities and distractions… Lessons of silence/stillness and importance of nature/nurture for healing.

To share principles of simplicity and service and help others prioritize their lives in this direction.

Clear your soul at the historic Sewall House, built in 1865, where yoga instructor Donna Davidge’s great grandfather, William Sewall, taught Theodore Roosevelt the wonders, beauty, and healing attributes of nature. Mr. Sewall gained much of his native knowledge from the Indians and was an excellent log man.

Donna’s great grandfather’s chosen location in northern Maine is close to Canada and near Mt. Katahdin, where the sun first hits the East Coast as it rises; you can enjoy the nearby forests, lakes (Mattawamkeag Lake and Pleasant Lake), Baxter State Park and wildlife such as moose and loons. It is here you will be able to experience serenity and solitude, away from the trappings of everyday life. 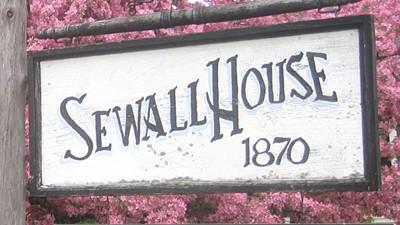 The Yoga retreat offers a warm Bed & Breakfast atmosphere filled with antique treasures and books as well as a lovely fireplace for gatherings in the living room. Yoga DVD’s and books are available for use during your stay.

Why come to Sewall House

Nourish your mind body and soul at Sewall House

A variety of forms of yoga are offered based on your level of yoga, taking into account your personal needs and reasons for being on a yoga retreat.

Let the fresh air of northern Maine, its wildlife, lakes and hikes along with the embrace of this historic home allow moments of reflection and healing. Sewall House offers all this within a supportive atmosphere, educating through healthy tasty eating, nurturing interactions and the wellness that a yoga lifestyle gives us.

We compost, use locally sourced food and use bulk products, including toiletries and do not serve the flesh.

Donna purchased her great grandparents’ National Historic Registry home in 1997 to save and continue her family legacy of friendship and healing in nature with likeminded seekers. 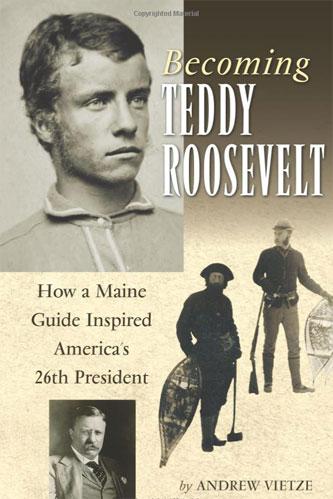 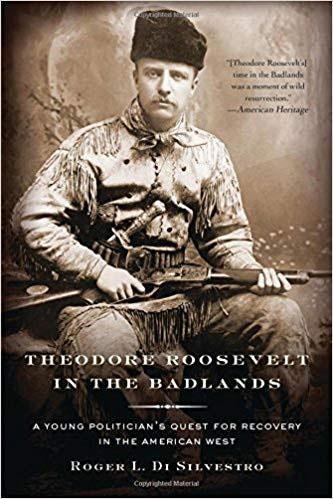 I owe a personal debt to Maine because of my association with certain staunch friends in Aroostook County; an association that helped and benefited me throughout my life in more ways than one.

It is over forty years ago that I first went to Island Falls and stayed with the Sewall family. I repeated the visit three or four times. I made a couple of hunting trips in the fall, with Bill Sewall and Wilmot Dow; and one winter I spent three or four weeks on snowshoes with them, visiting a couple of lumber-camps. I was not a boy of any natural prowess and for that very reason the vigorous out-door life was just what I needed.

It was a matter of pride with me to keep up with my stalwart associates, and to shift for myself, and to treat with indifference whatever hardship or fatigue came our way. In their company I would have been ashamed to complain! And I thoroughly enjoyed it. I was rather tired by some of the all-day tramps, especially in the deep snow, when my webbed racquets gave me “snowshoe feet”, or when we waded up the Munsungin in shallow water, dragging a dugout, until my ankles became raw from slipping on the smooth underwater stones; and I still remember with qualified joy the ascent and especially the descent of Katahdin in moccasins, worn because, to the deep disapproval of my companions, I had lost one of my heavy shoes in crossing a river at a riffle. 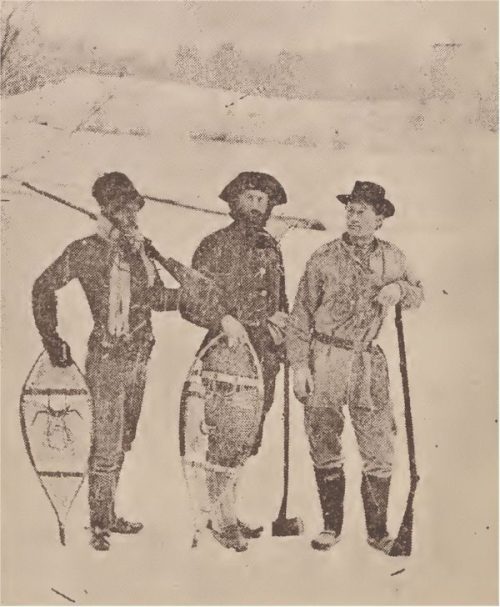 Theodore Roosevelt on His First Maine Vacation.From an Old Tintype Showing His Companions, Bill Sewall and Dow on his left.

I also remember such delicious nights, under a lean-to, by stream or lake, in the clear fall weather, or in winter on balsam boughs in front of a blazing stump, when we had beaten down and shoveled away the deep snow, and kept our foot-gear away from the fire, so that it should not thaw and freeze; and the meals of venison, trout or partridge; and one meal consisting of muskrat and a fish-duck, which, being exceedingly hungry, we heartily appreciated.

But the bodily benefit was not the largest part of the good done me. I was accepted as part of the household; and the family and friends represented in their lives the kind of Americanism, self-respecting, duty-performing, life-enjoying, which is the most valuable possession that any generation can hand on to the next. It was as native to our soil as “William Henry’s Letters to his Grandmother” I hope there are still readers of that delightful volume of my youth, even although it was published fifty years ago.

Mrs. Sewall, the mother, was a dear old lady; and Miss Sewall, the sister, was a most capable manager of the house. Bill Sewall at that time had two brothers. Sam was a deacon. Dave was not a deacon. It was from Dave that I heard an expression which ever after remained in my mind. He was speaking of a local personage of shifty character who was very adroit in using fair-sounding words which completely nullified the meaning of other fair-sounding words which preceded them. “His words weasel the meaning of the words in front of them,” said Dave, just like a weasel when he sucks the meat out of an egg and leaves nothing but the shell;” and I always remembered ”weasel words” as applicable to certain forms of oratory, especially political oratory, which I do not admire.

Once, while driving in a wagon with Dave, up an exceedingly wet and rocky backwoods road, with the water pouring down the middle, I asked him how in Aroostook County they were able to tell its roads from its rivers. ”No beaver dams in the roads,” instantly responded Dave.

At one of the logging-camps I became good friends with a quiet, resolute-looking man, named Brown, one of the choppers; and afterwards I stopped at his house and was as much struck with his good and pretty wife as I had been with him. He had served in the Civil War and had been wounded. His creed was that peace was a great blessing, but that even so great a blessing could be purchased at too dear a price. I did not see him again until thirty-seven years later when he came to a meeting at which I spoke in Portland. He had shaved off his beard and was an old man and I did not at first recognize him; but after the first sentence, I knew him and very glad indeed I was to see him once more.

In the eighties I started a little cattle-ranch on the Little Missouri, in the then territory of Dakota, and I got Bill Sewall and Wilmot Dow to join me. By that time they had both married and they brought out Mrs. Sewall and Mrs. Dow. There was already a little girl in the Sewall family, and two babies, a small Sewall boy and a small Dow boy, were born on the ranch. Thanks to Mrs. Sewall and Mrs. Dow, we were most comfortable. The ranch-house and all the out-buildings at the home-ranch, the Elkhorn, were made of cotton-wood logs and were put up by Bill and Wilmot who were mighty men with the axe. I got them to put on a veranda; and in one room, where I kept my books and did my writing, we built a big fireplace, and I imported a couple of rocking-chairs. (Only one would have made me feel too selfish.) The veranda, the open fireplace, the books and the rocking-chairs represented my special luxuries; I think Mrs. Sewall and Mrs. Dow enjoyed them almost as much as I did.

We had stoves to keep us warm in the bitter winter weather and bearskins and buffalo-robes. Bill and “Wilmot and I and usually one or two cow-hands worked hard, but it was enjoyable work and the hunting on which we relied for all our meat was, of course, sheer fun. When the winter weather set in, we usually made a regular hunt to get the winter meat and we hung our game in the cottonwood trees which stretched before the house. I remember once when we had a bull elk and several deer hanging up and another time when we had a couple of antelope and a yearling mountain-sheep. The house of hewn logs was clean and comfortable and we were all of us young and strong and happy.
Wilmot was from every standpoint one of the best men I ever knew. He has been dead for many years. His widow is now Mrs. Pride; and her present husband is also one of my valued friends.

When I was President, the Sewalls and Prides came down to Washington to visit us. We talked over everything, public and private, past and present; the education and future careers of our children; the proper attitude of the United States in external and internal matters. We all of us looked at the really important matters of public policy and private conduct from substantially the same view-point. Never were there more welcome guests at the White House. 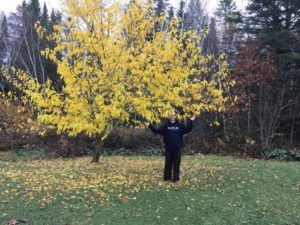 Looking for an all season vacation wonderland off the beaten path? No matter what time of year you choose to visit, Island Falls is a small community experience filled with breathtaking scenery, sporting adventure, pristine lakes and ponds, and fine dining.

Island Falls offers a four-season experience, is located right off I-95. Is a winter wonderland of tranquility where families come to enjoy some of the finest ITS snowmobile trails, and trail conditions of the terrain are a welcome addition to the enjoyment of the sport. The ITS connects the local snowmobile club as well as lodging and dining establishments. 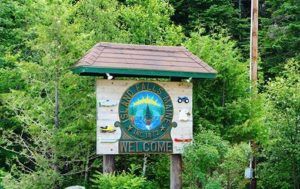 Spring brings the wildflowers in bloom, the trees budding, and the wildlife on the move. Days become longer and temperatures warmer inviting outdoor enthusiasts to take in some fishing, take a tour of the local historical society, visit the library or shop for a craft. Have lunch with a friend old or new, enjoy a scenic walk or revel in the ability to be out in the fresh, clean air.

Summer is a great time for canoeing, kayaking, fishing, and boating on our 2 large lakes or numerous small ponds and rivers, visit a vast array of historical sites, grab your clubs and enjoy a day on our 18-hole golf course that attracts golfers from all areas.

Fall is a wonderful time to enjoy the same summer activities in slightly cooler temperatures. The breathtaking beauty of the foliage viewed in crisp cooler air makes this a favorite season for many. With vast woods surrounding the town, wildlife abounds and the deer and moose season catches the attention of all. Local guide services can assist in planning, outfitting and guiding you on your hunting experience.

We invite you to come and see why vacationers come from all parts of the country to visit year after year. 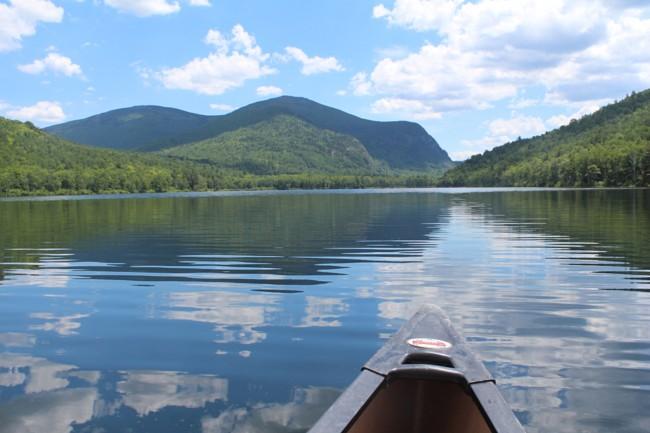 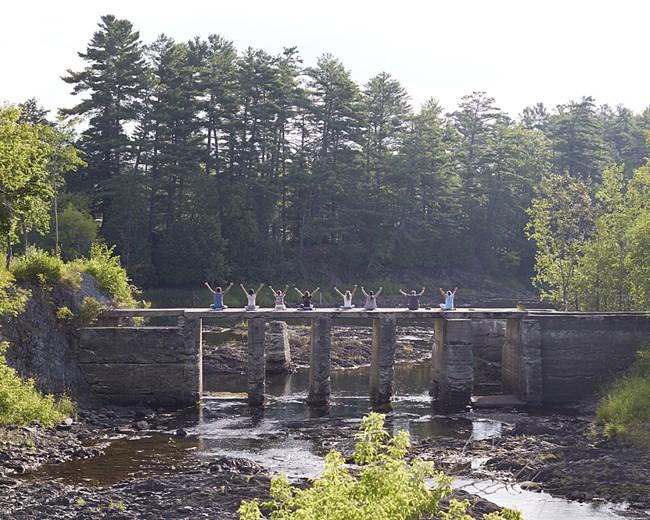 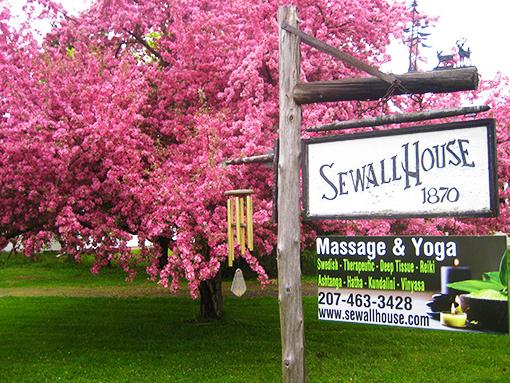 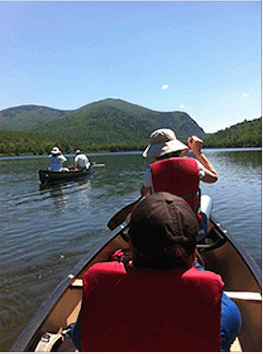 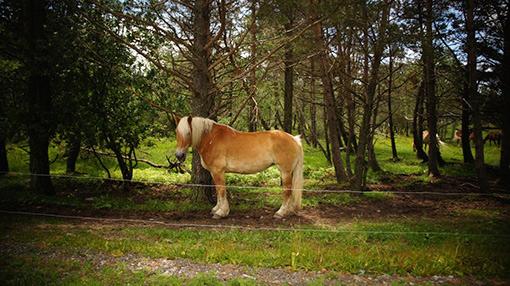 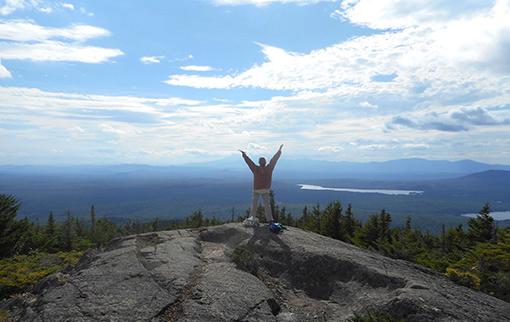 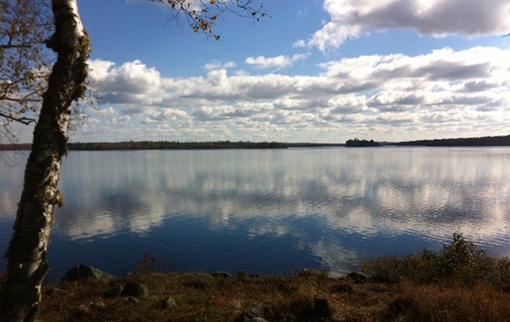 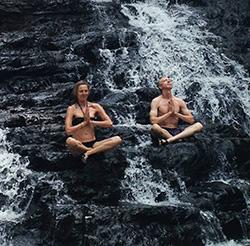 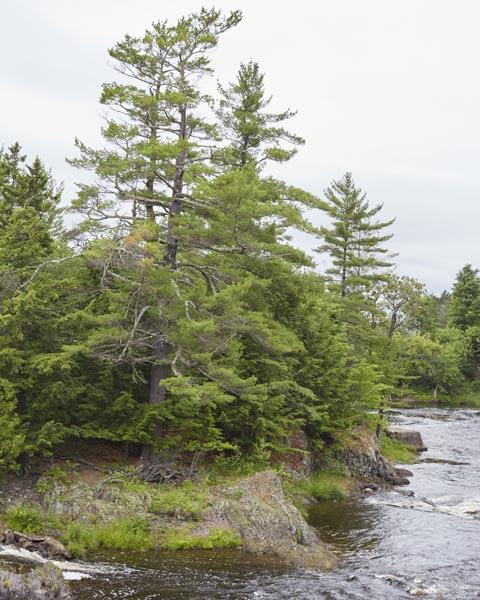 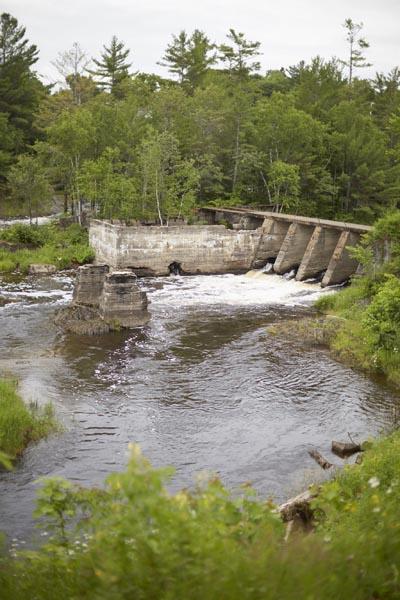