I want to send you a huge THANK YOU!  I was way more prepared for this 300 Hr program than many others here.  Your 200 Hr program is solid, expansive, informative and fun.  And I’m grateful for the many things I’ve learned from you! I really appreciate how much time, effort, love and dedication you’ve put into your program.  Sending you much love today, and every day. 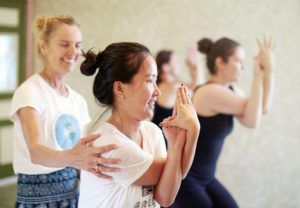 This is a unique opportunity to take a three week immersion teacher training in a small residential Retreat Center here in picturesque Maine. Sewall House offers a private, personalized atmosphere. The teacher training will be limited to 5 participants. What is also unique about the training is that the trainer learns about various forms of yoga for a better overall understanding and ability to teach a variety of forms or move on into specialization after the training. 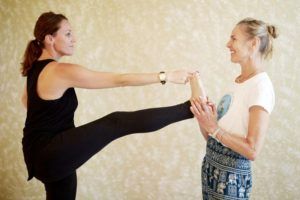 Each participant will have a private bedroom for rest and study.

Each day, the sessions will be 10 hours. There will be a total of 3 weeks of sessions to meet all of the 200-hour Yoga Alliance requirements of the training, plus homework.

Upon completion of the training and exam, the teacher trainer will be able to teach Kundalini Yoga as well as Hatha forms of yoga.

The June 2022 Teacher Training will have special modules on teaching children yoga and the use of sound (japa) in yoga, both taught by Ajeet, as part of our regular 200 hour three week schedule.

JUNE 2022 taught primarily by Donna Amrita
Special modules on Childrens Yoga , Japa (sound) with staff senior teacher AJEET this year and she will also teach SVAROOPA YOGA as well as HRIDAYA HATHA classes and coteaching the yoga sutras with Lindsay Samuels, past chef and teacher at Sewall House.
June training is currently full
If interested in wait list please contact us 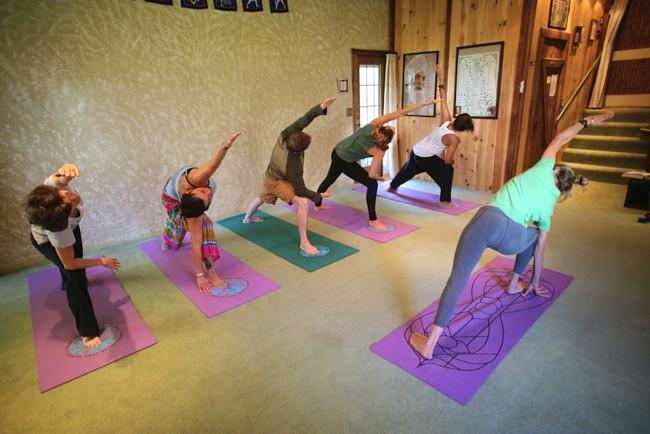 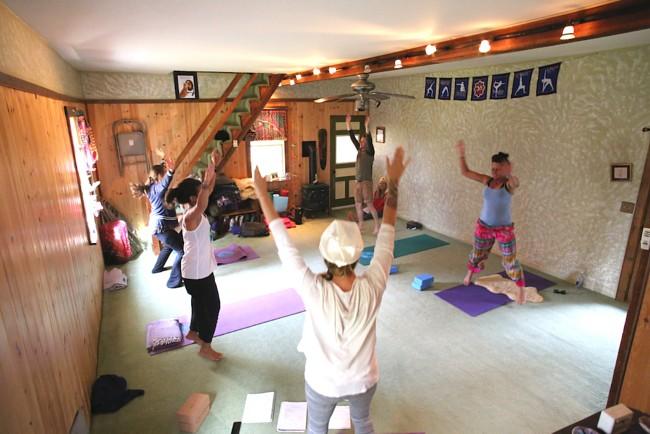 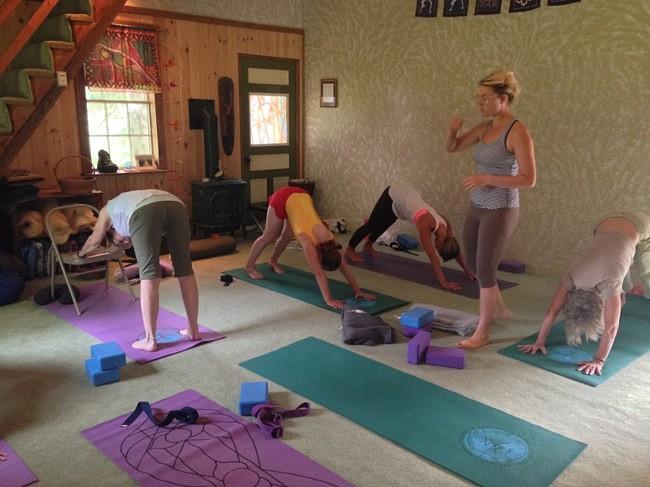 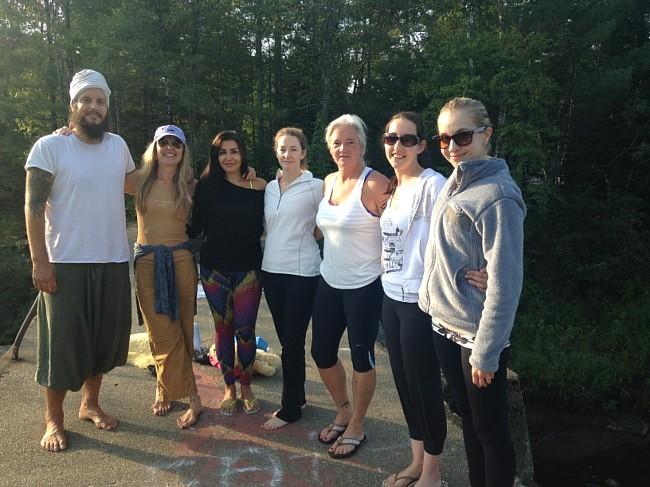 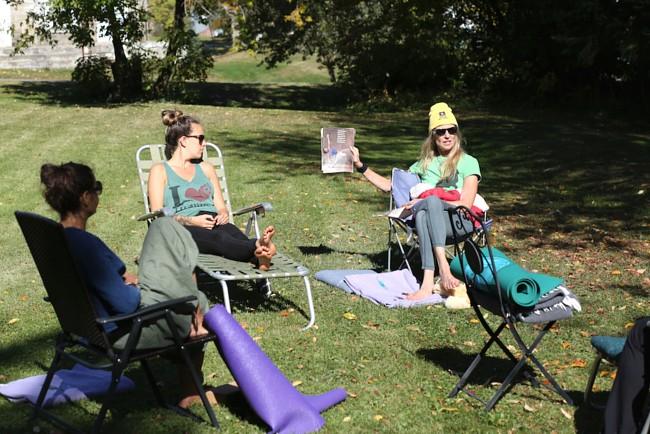 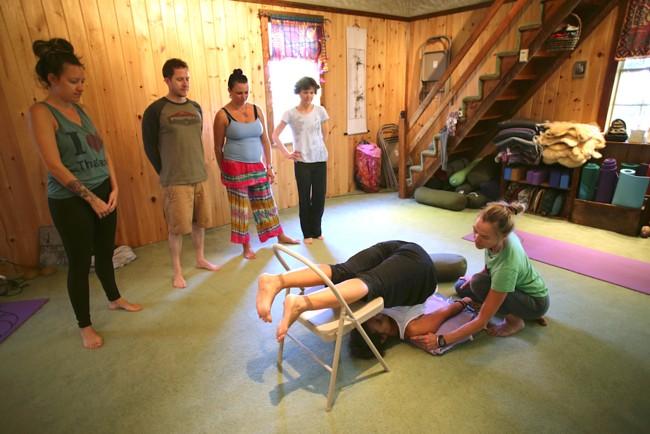 “Things that I love about my training: the people that I was privileged to share 27 days with, the fact that you started with the yoga sutras gave me the basis of what yoga could potentially do…ELEVATE OUR CONSCIOUSNESS…which collectively will elevate the consciousness of our planet. That is something that was very important to me as a yoga practitioner. I loved the accessibility of all involved but especially YOU. I think the smaller group and the close proximity of our day in and day out schedule contributed to my own growth.

Although I wasn’t thinking about teaching Kundalini yoga the kundalini offerings contributed the most to my own personal growth. Thank you for requiring us to do a forty day discipline!!!! I think it would be an absolute benefit to anyone seeking to grow as a yoga teacher and practitioner. I really haven’t felt as moved or peaceful since our yoga practice together. I also haven’t appreciated the smell or taste of my first morning cup of coffee as much either. The accommodation were wonderful and the food was fabulous!”

“I’ve always been interested, especially Kundalini yoga. However, I hadn’t really thought about taking a teacher training until I visited Sewall House last year. Sewall House is a serene place, perfect to get immersed in training. I enjoyed my three week intensive training and learned a lot from Donna. She covered so many topics that really helped me understand the origins of yoga and that it’s so much more than just about asanas.

Donna not only brings theory to the training, she also speaks from experience from her many years as a teacher and small business owner, which is why I enjoyed the training so much. After all, theory only gets you so far and you want to have a teacher that can also address how to deal with difficult situations, create space and much more.I haven’t taught yet but the training has advanced my own yoga practice because I have so much more background on why we do the poses And meditations we do. I do plan to teach one day but in the meantime, I take different classes to continue learning”.

This intensive and immersive training was a great way to focus completely on all aspects of yoga for 3 full weeks.  Intimate setting, one on one training…completely customized! Many different styles of yoga – Hatha, Kundalini, Vinyasa, Iyengar, Ashtanga, Restorative, Yin! Donna’s vast experience allowed for a very diverse education.  Exactly what I needed! There were so many things that came up in this training that apply to daily life.  One of my favorite concepts that I still work on daily:  Respond, don’t react.   Little did I know at the time that within 6 months after completing this wonderful training, I’d be purchasing my own yoga studio!

Who will you be learning from?

Donna (Amrita) Davidge (500 Hr Yoga Alliance E-RYT) has a well-rounded background in (various forms of) yoga. Amrita has taught Kundalini Yoga in various 3HO settings (solstices, festivals, centers) since 1985 (Over 30 years) and other forms of yoga, such as Vinyasa, Ashtanga, Restorative and Nidra, since 1999.

She has tens of thousands of hours teaching in various settings, from corporations to health clubs to yoga centers, privately and at her own (Sewall House) and other yoga retreats/spas (Puravida Costa Rica, Nu-Age, Spannocchia Italy), as well as on radio, television and in print.

Since 2003 she has also taught many hours of Hatha, Ashtanga Series One and Vinyasa Yoga based on her studies (since 1999) with Eddie Stern and Dharma Mittra in New York City. She has been studying with Genny Kapuler’s Iyengar based practice since 2003.

Besides producing two audiocassettes, one booklet and two videos in the 1990’s, Amrita produced two Kundalini Yoga DVDs in 2004. Many of Amrita’s students have gone on to take the Kundalini Yoga teacher training. Amrita’s style of teaching is warm, welcoming, non judgmental, informative and safe. She approaches yoga as a lifelong lesson and journey of self-study, as a way to better understand and explore your own mind, breath and physical body. This teacher training will give you that opportunity as well.

The teacher training should be viewed as a beginning rather than an endpoint. Amrita (Donna) will impart what she knows to start you on this path well equipped. Tuition for the course is $2700, which can be paid in three $900 installments. If paid in full with credit card the charge is $2500, cash or check is $2400.

Room and Board is additional $100/night and includes a private room, 3 healthy mostly organic home-cooked (and acclaimed by our guests!) vegetarian meals per day, yogi tea (all day) and coffee (morning only). No alcohol or recreational drugs are allowed at the retreat. Please make sure the specific dates work for you and that you can arrange your schedule accordingly.

“Thank you so much for being my teacher! I know it will be a lifelong learning. Thank you for propelling me further. I so appreciate your commitment, passion, and compassion. I have learned much from you.”

Please click here for the application if interested. Please make clear your reason for taking the training, as this is an important requirement. It is not about years of experience, though you are expected to have had some yoga experience. If you have only taken a few yoga classes you may not be a good candidate for this training but may still apply as the reasons for taking it are as important as your experience.

If that is the case, you may be required to take a certain number of classes before the training. You are expected to attend all sessions, do all work that is required, as well as practicums and work outside the classroom. Completion of the exam is at the end of the program.

Sewall House is located in a small village in northern Maine. You may view the rooms on our accommodation page; they are roomy and comfortable, beautifully furnished. This environment gives the student teacher the opportunity to concentrate on the studies while living in a like-minded community. Your work will then help you incorporate and build what you have learned into your own practice, homework and potential as a teacher.

It is important that you are able to commit to the entire program!

Please consider this carefully as there will be no refunds, though the tuition can be paid as you go along (you will still be charged once you have committed to your spot). Payment is by Visa, MC or personal check (if you are paying the full amount in one payment for reduced cost).